So I’ve decided that I have been really dropping the ball on my blogging duties. To remedy the situation, I am forcing myself to get in a habit of blogging every day by commencing, starting today, the 365 day blog-athon. Every day for one year, barring severe illnesses or amputations, I will sit at my computer and write a blog about writing, my new work in progress, the publishing industry, self publishing (how great it is or how much it sucks, depending on the moment), encounters with readers, reviews, books I’m reading, whatever. I’m going to blog all about it right here. After all, that was the reason I started this site…to share my thoughts with the world because, contrary to popular belief, all of my thoughts do have a place in this world…if only on this blog. Some will be longer than others, some will be shorter than others, but rest assured I’ll have something interesting to share. At least I hope you think so.

And I have a great thought to share today–why it’s so important to finish the first draft of anything and everything. Even if it’s a shitty first draft (to quote Anne Lamott’s Bird by Bird). 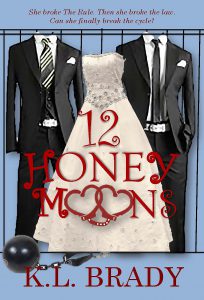 So, I just finished my 8th novel–12 Honeymoons. I can hardly believe it when I write that. Six years ago when I wrote and published my first book I didn’t think I had the chops to stick it out this long…and somehow I scratched and clawed my way through.
So, I started the book four or five years ago. I never could get past chapter 7. I had no idea what that book was supposed to be. I’ve never been one to throw away an idea because it’s not working. Generally speaking, I’ll shelve the book until the characters start speaking to me. So, I put that one on the shelf and wrote the J.J. McCall series.
Five years later, late December, early January, the characters start speaking again and I pick it up. Let me tell you, I’m writing this story furiously every day for about three months and I have NO idea where the story is going, how it’s gonna end, why certain people are showing up and doing crazy things. I was truly just a vessel for this story. What little outlining I completed, the characters veered so far away from it that it’s not recognizable from its intended form. Every day was a new adventure. It really wasn’t until I wrote the final page that I figured out what the darn story was about. After I made the connections, I then went back through the book over three more edits and connected all the dots.
My point here is…FINISH the DAMN BOOK! I preach it all the time, but I’ve never had an occasion to write a book and not know where the book was going. I usually have some idea of what the book is supposed to be, but this time–no way. Nothing. I drew a blank. The way the story unfolds will be as much a surprise to the reader as it was to me. My characters went rogue. I lost control of the story at the title page.
Sometimes, you are just supposed to listen to the voices, write the words, and figure out what the hell it is after you’re done. And that’s okay. That’s fine. You’ve written a legitimate book despite it’s lack of direction. And thankfully the editing process allows you ample opportunity to connect the dots for your readers and yourself.
Just FINISH already. Yeah, you!